Last week I spent several days in Jackson, MS with a pretty diverse group of educators, community activists and leaders to plan a retreat for next year.  Like many convenings, this year’s retreat was less than perfect and perhaps overly ambitious.  There were incredibly important and powerful moments – some were teachable and awkward, others, touching, emotional and uplifting.  Because we were in Jackson, MS there was a unique opportunity to examine the roots of the civil rights movement and the ways in which racism and the remnants of discrimination and Jim Crow are still impacting education and equity to this day.  We visited historic landmarks like the home where Medgar Evans was assassinated and also connected with local folks exercising their voice and working to avoid a state takeover of the school district.

What began over 45 years ago as a study group of educators concerned about the accountability of schools and the assessment of children has morphed into an annual retreat for a collective of educators, activists, historians, authors, scholars and students who come together to explore the possibilities of an education landscape were teaching and learning is more child-centered and engaging, culturally relevant, and grounded in social justice and democratic principles.

This loosely organized group of folks have a lot of shared values and the best of intentions.  As I reflected on own participation during our time together, I was struck by the parallels between the group’s history, the adjustments they’ve made over the years, the challenges that emerged and the often-clumsy attempts at managing change and navigating intersectionality. This is and was particularly true at the intersections between race, age, gender and to some extent, class.

These challenges are certainly not unique.  Many of us struggle to operationalize principles of inclusion, collaboration and a range of shared values.  We are experts at helping others improve their collaboration and engagement of historically marginalized constituencies.  We can preach a great sermon but when it’s time to practice what we preach, change our own funky behaviors or let go of control, we sometimes fall short.

Origin Stories
For most of us, the reasons why we struggle (both as individuals and as organizations) to navigate these complexities can be found through closer examination of our origin stories and deeper reflection of who we’ve been, how we’ve come to be in this moment and what changes we need to make to better serve ourselves and our causes.  As individuals committed to changing the world for the better, reflection on our practice, regular feedback from those we trust and changing our behavior is paramount. That has certainly been the case when I reflect on my own journey. The same is true for organizations – whether they be loosely configured and temporary or highly structured and in it for the long haul.

My own organization was founded almost 55 years ago with the best of intentions by a key architect of the Elementary and Secondary Education Act of 1965.  Fast forward to today and, while we’re proud of our work and contributions, we too have to work hard internally to practice what we preach externally.  Make no mistake.  We each bring ourselves–the good and the bad–to every endeavor. We’re just a group of ordinary people trying to use our powers for good.

Superheroes, Superpowers and Practice
In popular culture, most of what we hear and know about origin stories is related to superheroes and how they got the superpowers.  Many a comic book, graphic novel, television series and feature film has been devoted to the origin story of our favorite heroes (and villains).  Typically, the outcome of some impending disaster and even the fate of humanity is at stake while our superhero figures out a solution and/or learns to work well with others. Whether you’re down with the Avengers or the Justice League, chances are you know the origin story of your favorite superhero.

As their powers emerge, every superhero has to learn how to regulate and master their unique gifts.  They have to learn how and when to use their powers and, more importantly, how to stay humble and use their powers for good.  They have to practice.  In the intro to an NPR Tiny Desk Concert performance of the song Practice by August Greene, the rapper/Hip Hop artist Common talks about how “life takes work” and that we have to work on “ourselves and any craft that we’re about.”  The song’s hook reminds us that “changing pathways might take some practice.”

Most of us will never be exposed to gamma rays or emerge from a science experiment gone bad with magical powers.  We’re much more likely to be bitten by some dramatic (or traumatic) life experience than a radioactive spider.  But we can certainly practice.  In fact, we had better practice if we’re going to “be the change we want to see in the world”.  In today’s parlance, individuals who consistently exhibit high levels of awareness and the ability to navigate complex interpersonal dynamics and intersections are considered “woke”.

If I were to rush to the scene of some impending disaster requiring my unique skillset, rip off my shirt to reveal my superhero uniform, the emblem on my chest would be Woke AF. Or at least I’d like to think so. While it may be true that it takes 10,000 hours of practice to achieve mastery, being woke is not a permanent condition.  There’s a kind of Zen to being woke – a way of being and a state of mind.  Once you think you’ve got it, you’ve probably lost it. In a world that’s constantly changing and with contexts constantly shifting, staying woke takes work.

Tensions and Lessons Learned
Aside from a few clumsy moments and missteps, a key shortcoming at this year’s retreat was our inability to fully integrate youth voice into the proceedings and facilitate meaningful interactions between and among the youth who attended.  Like many older organizations and collaborative efforts, veterans who’ve been at the helm for many years struggle to let go of the reins and let new and non-traditional leaders and voices emerge. When the old timers and gate keepers are white and the new leaders being held back are younger and people of color… have you heard this story before?  In planning for next year, the group hoped to avoid this weakness by making a concerted effort to have youth leaders attend last week’s planning meeting and to actually listen to them.

In the planning meeting we had some tough conversations and one or two come-to-Jesus moments.  After a few caucuses, interventions and adjustments we held one another accountable and did a better job of listening, particularly to the young people present.  Our efforts were rewarded in unforeseen ways and a crisis was averted. Serendipitously, our planning group was visited by some of the world’s newest superheroes, students from Marjory Stoneman Douglas High School in Parkland, Florida and the #marchforourlives movement. Jackson, MS was one of their stops on a tour through several southern states where they have been working to get young people involved and registered to vote.  After sharing their stories of hope and inspiration and giving some of us veterans some timely advice, we had a wonderful dialogue that filled our spirits.  Then we took a picture together. And, since I volunteered to take the photo, my not-so-secret identity remains unrevealed. 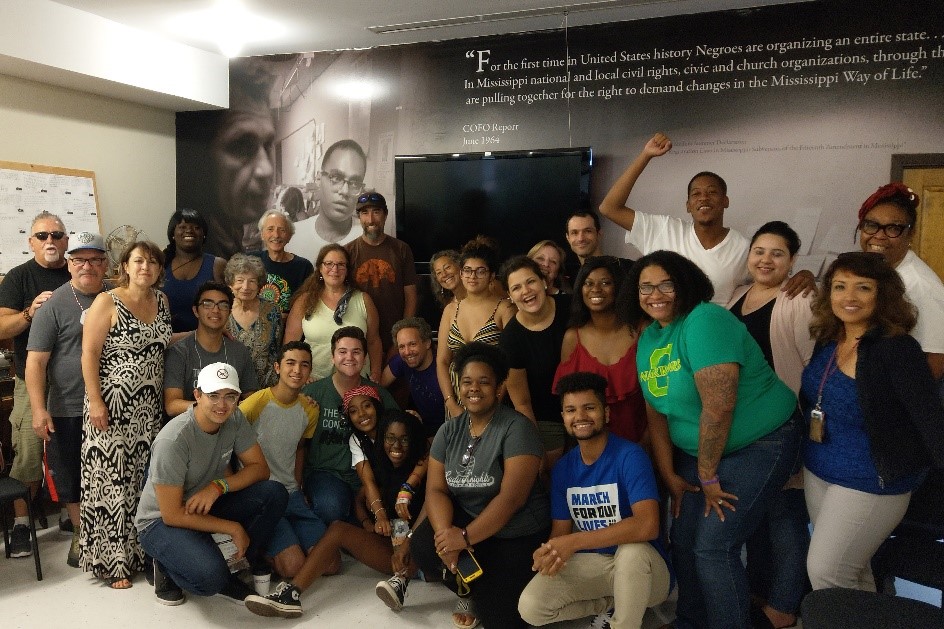