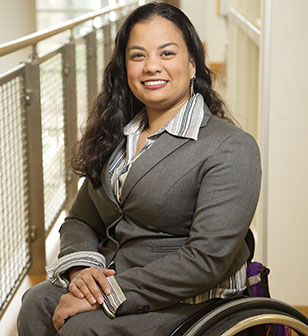 I was the type of kid who laid out my clothes and packed my school bag the night before. For anyone, the first day of high school is a milestone. I hear a vehicle turning the corner—you can always tell when someone is coming towards the end of a cul de sac—and I know that it’s my ride. I should warn you, though, that it’s not exactly the stretch limo that you envision bringing someone to their first Major League Baseball game, or the convertible that it would be so fun to roll up in on the first day of high school, which would instantly get you acceptance from others and to win the “cool” award. It’s the short bus.

But, this is my life. I roll down the driveway in my wheelchair onto the lift to be greeted by the semi-retired smelly old man whose pants never quite fit right. The drone of the lift goes up, I roll myself on. The smelly old man has to awkwardly climb all around me, getting far too close for comfort, as he spends another 10 minutes attaching a bazillion straps and metal clips to the frame of my wheelchair. It becomes like a treacherous game of Twister for him as he is trying to stabilize himself while reaching under my wheelchair. And now, I’m officially off to day one of high school, short bus and all… but still trying to hold onto that ounce of optimism.

Arriving at school that very first morning, disregarding the whole short bus incident, I was greeted by a series of let-downs. To start off, as I got off the bus, there was a crosswalk that was met by a curb at the other end. Once I finally located the ramp, a car blocked it, making it impossible for me to use. So now, this big first day of high school was something that was juuuuuust out of my reach. I could see it; I was technically on the property, but with absolutely no way to get in. What a tease! This pattern would continue over the years: the ramp would sometimes be blocked by the local police car, sometimes by teachers, by parents, by administrators… it didn’t matter. I didn’t matter.

There I was, clutching a piece of paper with my schedule written out on it with corresponding room numbers. I had rehearsed it and memorized classes and room numbers, but I was feeling a little flustered from the previous let-down, and was starting to feel overwhelmed by the number of people around me in the hallway.

TEACHER: (In a matter-of-fact tone) Yeah, just go straight down the hall, take your first right through the set of double doors and then an immediate left and the classroom will be straight in front of you.

ANJALI: Okay, thanks. (Roll away following his directions, recite them again.) Down the hall, first right, through the set of doors, immediate left… seems easy enough… Well, there’s the classroom alright. Right in front of me. Why didn’t he tell me about the freakin’ stairs too? Is he kidding me? Can you believe it?! This is going to be a long four years… Now what?

Silly me for thinking the hall monitor, dressed in a suit, was a knowledgeable adult. And so my battle against injustices, inaccessibility, and discrimination began. Despite being called out by a teacher in high school and asked, “What are you doing in an honors level English class? It’s not like you can go to college anyway,” I am Anjali Forber-Pratt, Ph.D. and a proud member of the ADA generation. My quest for an education marked an important journey, one that I am proud of. While I was involved in a fight to obtain a high school education, it was because of the protections afforded to me by the ADA that my case set precedent, being one of the first to award punitive and compensatory damages under the ADA. I am proud to say that not only did my case bring about changes, it truly changed a community’s understanding of the ADA. My high school diploma was my golden ticket to pursue higher education. I went on to obtain three degrees from the University of Illinois and am now an assistant professor at Vanderbilt University. The ADA made this journey possible for me and helped me to become the advocate and confident, independent woman I am today.