About the Annual Youth Transition Report 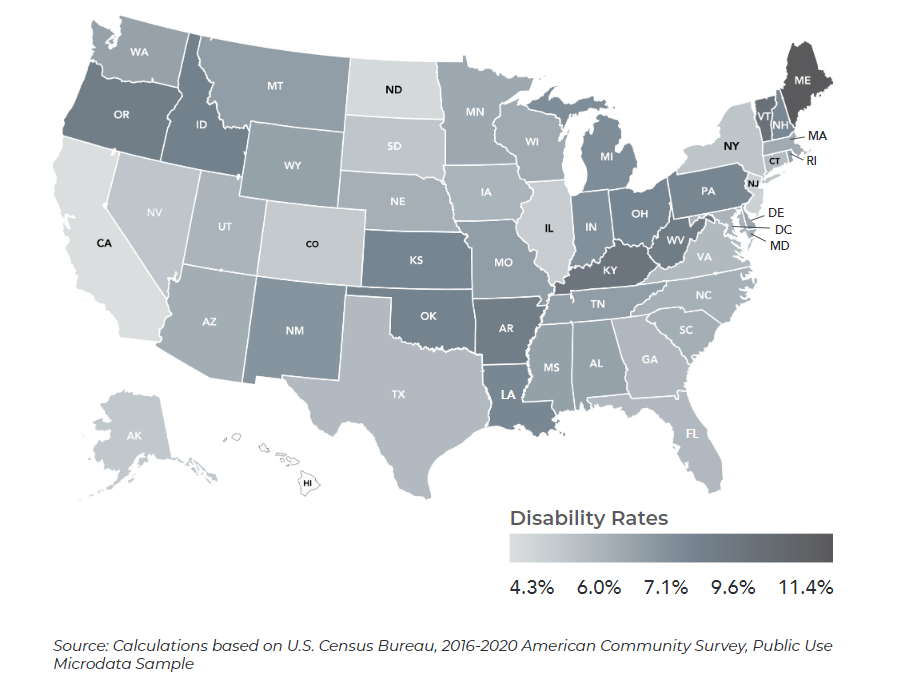 Highlights from the 2022 Youth Transition Report

This report includes the analysis of key educational and employment indicators for youth and young adults with and without disabilities at both national and state levels. In cases where data is not available or applicable for the under 16 or 18 population, we have noted the age ranges used.

Disability Rates: While the population of youth and young adults with disabilities varies by state, in those states with the highest rates of disability for 14–24 year-olds, the rates were more than twice that of states with the lowest rates of disability. Disability prevalence in this age group ranged f rom a high of 11.4 percent in Maine to a low of 4.3 percent in Hawaii. The largest category of disability, which is self-reported through the U.S. Census, was cognitive difficulty (70.1 percent of youth with disabilities nationally). Cognitive difficulty is a broad category that includes youth and young adults with autism, Down Syndrome, traumatic brain injury, dementia, attention deficit disorder, specific learning disability, and mental and emotional challenges.

College Completion: College completion at the bachelor’s degree level is another measure of success for young adults with disabilities. Academic success among states varied f rom the highest completion rate in Washington, D.C. (16.2 percent) to the lowest rate of completion in Wyoming (0.6 percent). The gap between those college students with and without disabilities was 7.5 percent. The narrowest gap in bachelor’s degree attainment at 3.3 percent was in Mississippi, but the state also had the highest enrollment rate gap of college students with disabilities at 21.7 percent.

What do the data tell us about youth and young adults with disabilities?

View the full 2022 report, as well as previous reports below: